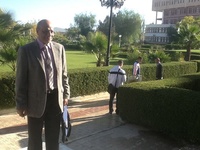 [ltr] Systematic thinking , (ST) is defined as a Practice  of thinking that takes a holistic  view of complex  events  or phenomenon, seemingly caused by myriad of isolated, independent , and usually unpredictable factors  or forces . ST views all events and phenomenon as 'wholes' interacting according to systems  principles  in a few basic patterns  called  systems archetypes. These patterns underlie vastly different events and phenomenon such as diminishing returns  from efforts, spread  of contagious  diseases, and fulfillment  in personal relationships . ST stands in contrast to the analytic or mechanistic  thinking that all phenomenon can be understood by reducing them to their ultimate elements . It recognizes  that systems ('organized  wholes') ranging from SOAP bubbles  to galaxies, and ant colonies to nations , can be better understood only when their wholeness (identity  and structural integrity ) is maintained , thus permitting the study  of the properties  of the wholes instead of the properties of their components . As a modeling language, ST illustrates cause-and-effect (causal) relationships that cannot be adequately explained by the 'subject-verb-object' constructions  of natural languages  such as English. As a discipline , ST was first proposed by the Russian researcher A. Bogdanov (who called it tektology) in his 1912 book 'The General  Science  Of Organization : Essays In Tektology,' and owes its modern status  to the biologist Ludwig Von Bertallanfy who in 1954 helped establish  what is now called 'Society Of General Systems Research .' Previously called tektology. See also general systems theory .[/ltr]

There are different levels of systems thinking maturity. The ones I've encountered are:

Level 0. Unawareness - Completely unaware of the concept of systems thinking.
Level 1. Shallow Awareness - The person is reasonably aware of the concept but does not understand it to any serious depth. He or she throws around the right buzzwords, and may have some good systems thinking intuition, but with few effective results. The problem here is this type of person may strongly feel they are a systems thinker. But they are not, so they do not gain any of the benefits of true systems thinking analysis. They also cannot tell a good systems analysis from a bad one. This type of person can be called a pseudo systems thinker. From what I've seen, most people who use the term systems thinking are on this level or the next, or somewhere in between. Unfortunately most seem to be on level 1.
Level 2. Deep Awareness - This type of person is fully aware of the key concepts of systems thinking and has a sound grasp of the importance and potential of systems thinking. They think more like a user of systems thinking output or a manager of work efforts that involve systems thinking. They understand what systems thinking is on the surface, but how to build glass box models remains a mystery. They can read causal flow diagrams and simulation models to at least a small degree, and can think a little in terms of feedback loops, but they cannot create good diagrams and models. They know what system structure and reinforcing and balancing feedback loops are, and why the forces those loops create are the most powerful forces in the humans system.
Level 3. Novice - A novice has deep awareness and has begun to penetrate the black box of why a system behaves the way it does. At a minimum, they have learned how to create original causal flow diagrams and can use them to solve many easy and some medium difficulty complex social system problems. A really good novice will be able to read simulation models fluently.
Level 4. Expert - An expert has gone a giant step further than a novice. They have learned how to create original correct simulation models using the tool of system dynamics . This allows them to solve difficult complex social system problems. Any organization working on solving the sustainability problem using an original approach needs at least one expert on their staff or needs to somehow have their work driven by one. They also need many novices.
Level 5. Guru - This is an expert who is able to teach others and make crucial original contributions to solving extremely difficult complex social system problems.

If you would like to become a deep awareness or novice systems thinker, start with the bookThe Fifth Discipline: The Art and Practice of the Learning Organization, by Peter Senge. Work through to the fifth chapter, titled A Shift of Mind. There Peter does indeed shift the mind with a superlative introduction to systems thinking, one so good the book turned much of the American business world onto systems thinking in the 1990s, when it was first published. In this chapter Peter defines systems thinking as "a discipline for seeing the 'structures' that underlie complex situations, and for discerning high from low leverage points ."
And then, if you really want to get serious and become an expert, try John Sterman's Business Dynamics: Systems Thinking and Modeling for a Complex World. As the title suggests, this will not only turn you into a systems thinker. It will also turn you into a modeler, using system dynamics . This is the book I taught myself modeling with, and The Fifth Discipline is the book that planted the seeds that lead to taking that plunge.
Aim of study
The aim of this study is teste how children in elementary school use, the systematic thinking in problem solving.
[ltr]Read more: http://www.businessdictionary.com/definition/systems-thinking-ST.html#ixzz32jkaKl45  [/ltr]


[ltr](1) Barry Richmond's quote is from this article on System Dynamics/Systems Thinking: Let's Just Get On With It .[/ltr]